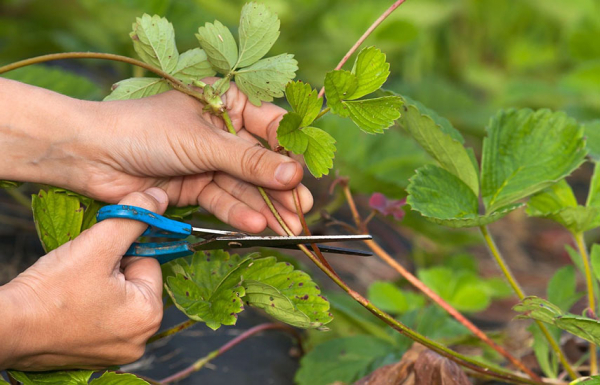 What to do with strawberries in the fall: pruning, feeding, care

By Administrator Posted on 30.10.2022 Leave a Comment on What to do with strawberries in the fall: pruning, feeding, care

Ordinary strawberries have already yielded their crops, and red-cheeked berries are still ripening on bushes of remontant strawberries in September, but experienced gardeners are already preoccupied with preparing the berries for winter. During the season, strawberry bushes are processed three times; September is just the last pre-winter processing, which must be completed in full and correctly. How to do it — see below.

Strawberries in autumn: what a summer resident needs to know

There is a set of works for the care of strawberries, which is recommended to be strictly carried out in order to obtain a high yield of berries next year. Strawberries require similar care. Many gardeners trim the leaves on the bushes, cut out unnecessary mustaches, and believe that the job is over, strawberries can easily winter, but this is not enough. So where to start preparing strawberries for winter?

There are many supporters of autumn pruning of strawberries, but about the same number of opponents of this procedure. We remind especially zealous summer residents that it is unacceptable to leave strawberry bushes completely without leaves in the winter.

It is best to prune the leaves in August, when all diseased and dried leaves are removed from the bushes. Then in September, strawberry bushes will be overgrown with young foliage, which will not have time to become covered with rot or aphids. In September, it remains to inspect the bushes, remove broken leaves with sharp scissors. On bushes of remontant strawberries, leaves are not cardinally removed before wintering, but only sanitary pruning is carried out.

How to feed strawberries in autumn

In September, the strawberry bushes are depleted, the plants have spent a lot of energy on the ripening of berries, so before wintering it is necessary to feed them, replenishing the supply of nutrients.

In autumn, top dressing for garden strawberries is applied in two stages:

Each summer resident uses his own formulations to fertilize a berry plantation, but there is one rule that is recommended to be carefully followed.

Important! Nutrient compositions containing nitrogen are carefully introduced into the second dressing for strawberries, otherwise the plants will receive a new stimulus for the growth of green mass, which is undesirable in autumn before wintering.

At the first stage of autumn feeding of strawberries, you can use mullein infusion in a ratio of 1:10, which is used to water the bushes (no more than 1 liter for an adult plant).

A solution prepared from 2 liters of water and 100 g of yeast is infused, then dissolved in 8 liters of water, allowed to brew and the bushes are watered. Such top dressing enriches plants with microelements, phytohormones, satisfies the need of plants for vitamins of group B. 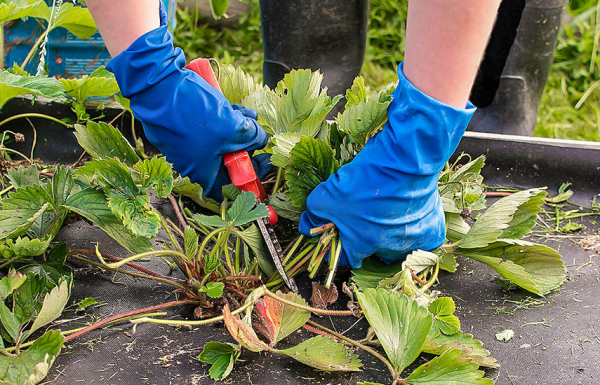 For the second autumn top dressing, you can use special mineral fertilizers designed to feed the berry before wintering.

It is useful to mulch beds with strawberries with ash, which will provide plants with nutrition and protection from pests and gray rot.

In autumn, it is useful to add double or simple superphosphate under strawberry bushes, which will increase the stability and increase the endurance of plants in cold weather. For 1 m2, you need to take 40 g of fertilizer in granules. It can be used dry.

Before processing the strawberry bushes, the old mulch, which covered the soil under the bushes, is removed from pests. It is especially important that hay, straw or sawdust be removed from the beds, in which pests prepared for wintering can hide.

After processing the beds, a new mulch layer is laid on the soil, but this is done already at the onset of the first frost.

Processing strawberries from pests and diseases in September

How to process strawberries in the fall so that next year the plants do not become infected with fungal infections and avoid pest invasion?

Before starting work on the processing of strawberry beds, weed weeds, because it is in the grass that pests hide. This must be done very carefully so as not to damage the root system of berry bushes. Ideally, cardinal weeding of strawberries should be carried out in August, and in September only the remaining grass is removed. 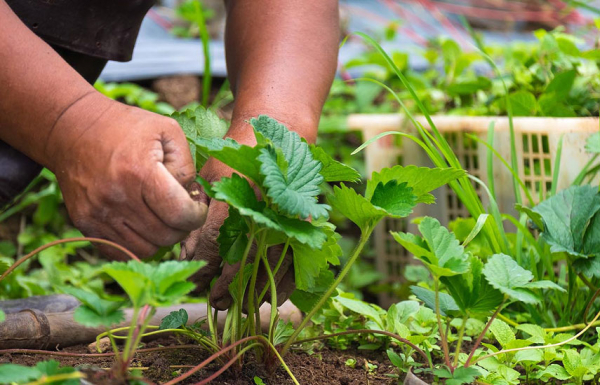 If gray mold damage was found on a strawberry plantation, the bushes can be treated with Horus (7 g of the active substance is diluted in 10 liters of water).

Nitrofen can be used to treat bushes and soil from fungal diseases, bushes can be sprayed with Topaz along the leaves. Such treatments will help reduce the risk of infection of strawberry bushes with fungi in the next season.

From pests, a berry plantation is treated with insecticides, among them Aktellik and Aktara showed good results.

When the strawberry bushes have finished fruiting, some summer residents believe that the plants have enough moisture from the precipitation, but this is not so. In September, the berry beds continue to be watered once every 7 days, while taking into account the weather conditions prevailing in this month. If rains are observed, and there is enough moisture, one watering can be skipped. 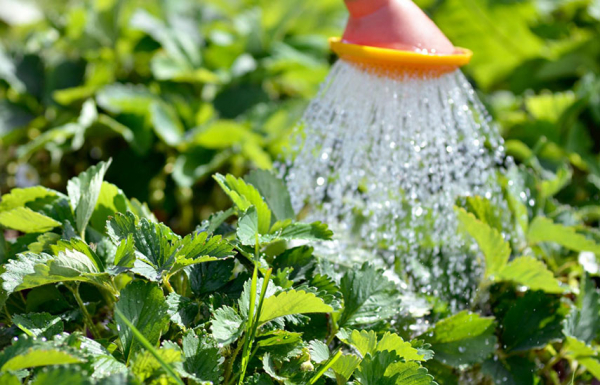 But leaving the berry without moisture is not recommended.

The last moisture-charging watering on strawberry beds is carried out from late September to early October, it is very important that the plants do not go dry before winter, otherwise they are in danger of freezing.

How to cover strawberries in autumn

The issue of protecting the berry from frost is an urgent issue for those gardeners who have plots in areas with harsh winters. Everyone is trying to save strawberry bushes in winter and protect plants from freezing.

If the region has warm and snowy winters (frosts down to -20C), then berry bushes will overwinter without shelter, but even in the southern regions, in snowless winters, with strong temperature fluctuations, freezing of plants is observed, which will damage flower buds and reduce yields next season.

In what cases is it necessary to shelter strawberries for the winter?

The implementation of the entire complex of works in the berry field in the fall is a guarantee of a high harvest in the future.