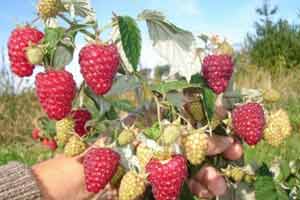 What is remontant raspberry and how to grow it

By Administrator Posted on 30.10.2022 Leave a Comment on What is remontant raspberry and how to grow it

The remontant properties of plants mean their ability to bear fruit again. Planting remontant raspberry varieties on the site allows you to get an almost continuous harvest of berries throughout the summer.

In agricultural technology, remontant raspberries differ little from ordinary varieties, but nevertheless, it has a number of significant advantages:

Growing remontant raspberry varieties today can be considered a priority for experienced gardeners. Therefore, we recommend that you follow their example and be sure to decide on its cultivation.

The process of planting remontant raspberries from «A» to «Z»

To obtain the optimal quality and quantity of the crop, choose sunny, wind-protected corners of the garden and light loamy soils with deep groundwater for planting remontant raspberries.

Choosing a place for raspberries

Demanding on the place of cultivation and the abundance of the sun are fundamental for remontant raspberries.

The soil should be fertile, and it is advisable to choose a growing site that was under plantings of lupine, mustard, rye or was fallow. Areas where tomatoes, peppers, potatoes or raspberries used to grow before are categorically not suitable.

Preparing the soil for planting raspberries

It is advisable to plant remontant varieties in the fall, at the beginning of October, however, spring planting is also quite acceptable, its only drawback is that the berries may not have time to ripen in the first year, because the plant will throw all its efforts into the formation of the root system and adaptation. The site, a few months before planting, should be prepared:

Caring for remontant raspberries in spring

In the spring, even before the soil completely thaws, mineral complex top dressing is applied. To prepare it, dissolve 15 g of ammonium nitrate, 20 g of potassium sulfate and 40 g of superphosphate in a bucket of water. In addition, the following actions will be necessary so that the raspberries do not get sick and bring a bountiful harvest: 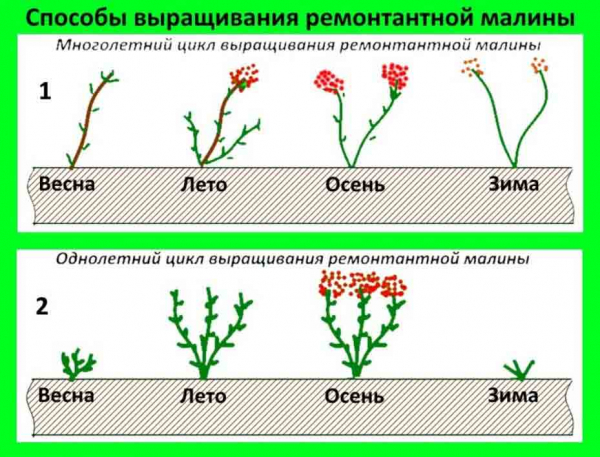 Caring for remontant raspberries in summer

During the summer, it is important to arrange regular and sufficient watering for the bushes (at the rate of 3-4 buckets per 1 sq.m of soil. In case of strong heat, it is better to shade the raspberry bushes by throwing a net over them.

Do not forget to also regularly loosen the ground around the bushes under the bush to a depth of 5-8 cm, in row spacing — 10-15 cm).

Also, at the beginning of summer, before fruiting, it is necessary to tie raspberry branches to the supporting pegs. But it is best to arrange trellises. For construction, try to choose materials that are least traumatic to delicate stems:

From the third year, in the summer, twice and even more often, organic matter is added under the bushes 3-4 kg per 1 sq. m, and the mineral complex:

Caring for remontant raspberries in autumn

Remontant raspberries are transplanted to a new place no more than once every ten years. For the winter, additional shelters are not required for the bush, but if after pruning you left a few stems, it is better to bend them down and cover them with spruce branches or a wooden box.