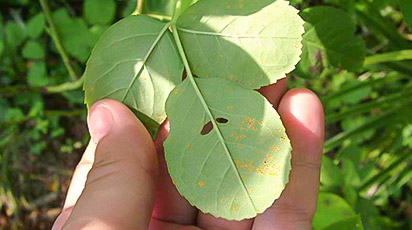 By Administrator Posted on 30.10.2022 Leave a Comment on rose flower

Rust on roses is recommended to be treated with various folk and chemical preparations. But the main thing is not the treatment, but the prevention of this terrible disease.

The fungus Phragmidium disciflorum is the very causative agent that many gardeners can very quickly identify. Around the middle of June, strange red rashes first begin to appear on the stems, which over time can spread to the buds. Since the fungus is able to penetrate very deep into the tissues, the use of conventional contact preparations will be helpless here. Rust on roses should be treated with systemic fungicides. Topaz, Falcon, beard liquid or Strobe will help get rid of the fungus.

Rust prevention on roses comes to the fore and consists of a double treatment of the plant (in spring and autumn) with copper-containing products. Folk remedies for rust control are not effective.

But rust is not the only disease that roses are susceptible to. Sometimes holes appear on the leaves of roses — this is the result of both fungal diseases and pests. And how to deal with it — read in our material.