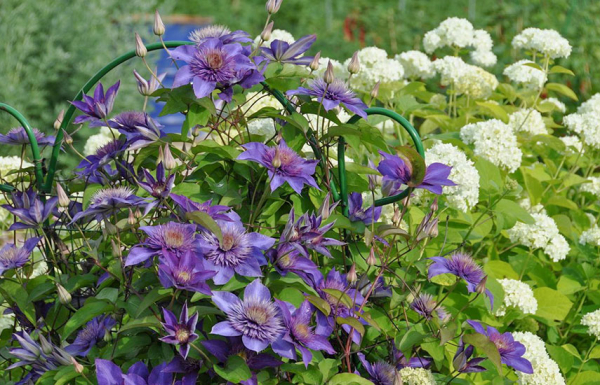 By Administrator Posted on 30.10.2022 Leave a Comment on Clematis care

With the onset of autumn, it’s time to prepare clematis for wintering, it’s not so difficult to do, but the most important thing in the pre-winter preparation of plants is to correctly prune, and we’ll talk about this at the very beginning of the article.

Clematis is usually divided into three groups, focusing on the methods of pruning. It is very important to determine which group your variety belongs to before this procedure. The thing is that with improper pruning of shoots, clematis may not bloom next year. When purchasing clematis seedlings, it is desirable to thoroughly know whether the variety belongs to a particular group, but by experience you can determine this yourself at the time of flowering of the plant.

It is not always possible to determine which pruning group your variety belongs to. What to do in this case? Many gardeners doubt whether it is necessary to prune such bushes if the variety’s belonging to a particular group is unknown.

There is a way out — this is a universal way to trim bushes. The shoots of the bush are divided into three parts, then they are cut off, applying the rules of different pruning groups to each sleeve. For the next season, the plant is closely watched, by the middle of summer it is possible to determine which group this variety can be attributed to.

Important! Clematis in the first year after planting is shortened before wintering in the same way, shoots up to 30 cm high are left above the ground.

Another method of combined pruning of clematis shoots is also used when you are not sure which group the plant belongs to. All shoots are pruned according to different patterns, alternating between cardinal removal of the shoot, shortening the top or ½ the length of the shoot. So the bush rejuvenates faster, and flowering will certainly come every year.

Clematis are very prone to fungal infections, so in the fall you can carry out preventive tillage under the plants. The procedure begins after the pruning. Fungicides are used for tillage, a good result was noted when using Fundazol. With a weak solution of the drug, the soil is shed in the near-stem circle. 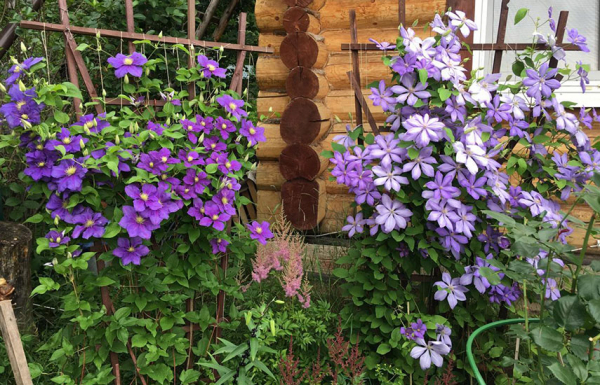 If the soil under the plant is acidic, it is deoxidized by adding ash. But first, the ash is mixed with sand in a ratio of 1:10. The mixture is scattered over the surface of the soil, with the help of garden tools, the soil is loosened, mixing a layer of ash with garden soil.

Leaves from clematis can be removed, and the stems can be treated with a 1% solution of Bordeaux mixture before wintering.

From the end of August to September, you can feed clematis to strengthen immunity before wintering. You can mix superphosphate and potassium salt in a bucket of water, taking them in half a tablespoon. After that, the water is thoroughly stirred, achieving complete dissolution of the grains. The solution is watered with clematis bushes under the root.

Important! Do not use manure, compost or humus to feed clematis in the fall. Nitrogen should be applied under the bushes in early spring to speed up the vegetation of the green mass.

An excellent fertilizer for clematis is ash, sometimes plants are watered with an ash extract. Up to 300 g of ash is added under an adult bush. You can use nitroammophoska as a fertilizer in early autumn.

Shelter of clematis for the winter

Clematis are heat-loving vines, they must be carefully protected from frost in winter by constructing a shelter.

It is easiest to cover varieties belonging to the 3rd pruning group, because it is convenient to cover small shoots with mulch. As a mulch for shelter from frost, the root part of clematis can be used garden soil, peat, humus. These materials cover the root neck of the plant, the height of the mound is up to 15 cm.

With the onset of frost, spruce branches are laid on top of the mulch layer, falling asleep on top with a layer of snow. 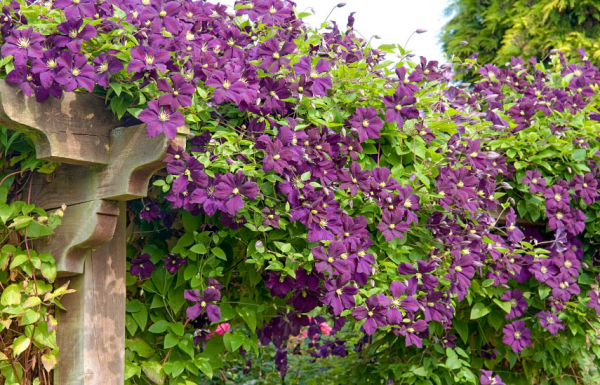 Clematis of the first and second groups of pruning are insulated for the winter by tying the shoots into bunches or rings. Plants are tilted to the ground, laying on a film, boards or other material. It is very important that live shoots do not freeze into the snow, do not get wet during bad weather. If clematis grow in a row, you can knock down a special frame by laying the shoots inside in a horizontal position. The root part of the plant is covered with a layer of mulch. The frame is covered with a film, falling asleep on top of the ground or peat. After snow falls, spruce branches are laid on wintering plants. On cold days, you can cover the wintering place of clematis with snow.

Important! To prevent damage to clematis by mice, it is recommended to inspect covered plants weekly. If traces of rodents are found near wintering clematis, measures must be taken to destroy the animals.

If the clematis bushes have not yet grown long stems, each bush can be covered from frost individually by wrapping it with film insulation.

Planting clematis in open ground in autumn is quite possible, but this procedure cannot be delayed for a long time, the bushes must have time to take root in a new place before frost. The best time for planting and transplanting clematis bushes is from late August to mid-September. In one place, the plant can live up to 30 years, so immediately choose a suitable site for planting.